Sometimes, I meet authors who pop up with answers to questions I have always wondered about. South Africa is a country that fascinates me. Some call it racist, some call it life. I think it’s just another culture in this big world and one that has both good and bad parts. Jacob is a South African native and I wanted to grill him about his experiences as a citizen of SA. Jacob is a stock market trader and his time is limited– so we had to to cover a lot of ground during this interview. Why am I still talking? Let’s go see what happened…

Q) What caused you to move to South Africa in the first place?

A) My grandfather came to South Africa in 1885 from Poland. My father was born in the town Potchefstroom, as was I.

Q) Let me ask you something you probably haven’t been asked before, Jacob. How do you feel about the South Africa you knew?

A) Today, South Africa is not the country I grew up in. Yes, Apartheid was horrible, but growing up in the country, one believed it to be the norm. It was only when I went to London as a student that I realized the horror of Apartheid. I must add though, that with a strong vicious police force, one could walk the streets at midnight without the fear of today. South Africa today is a country sinking into decay, with rampant crime as “reverse Apartheid” becomes the norm. People live in gated communities in Johannesburg and only go out at night to friends or restaurants that offer security.

Q) What are your memories of London? Do you miss the city?

A) I loved London. As a student aged eighteen years old, I arrived in London in 1953. The last of the war time rationing finished, and the sun was shining, turning London in July into a magical city. During my first days, after I had found digs opposite Battersea Park, I walked the city, loving everything I saw. Five years later, my parents came to fetch me and take me back to South Africa. Had they not, I would never have left.

Do I miss London? Very much. In 1976, I took my wife to London. I showed her a restaurant I always visited, The New Assam restaurant. We sat down at a table, and were given a menu that still showed the thumbprint I had left on it in 1958. When I asked the waiter, “Is your food today as good as it was in 1958?” He answered, “No sir, it is not. It is better.”

Q) Would you ever dare return to South Africa or is it too dangerous for you now?

A) I had to return to South Africa four years after I left and found that it was not the country I could feel safe in. The main street of Potchefstroom where I had my business, the Mooi River Pharmacy, had become a slum. Cape Town was a lot safer than Johannesburg, I believe, because the Cape Province is run by the Democratic Alliance Party, and not the African National Congress as is the rest of the country.

Q) The whole world is changing. Okay moving on– how did you get interested in writing?

A) I started writing my first book, BRAKENSTROOM, after a friend of mine died at a young age. Bernard had a heart attack and I was very upset. I wrote a short story about our friendship. Then I thought I should write about my Grandfather, so that my children would know who he was and how and why he came to South Africa. After that, the stories about people I knew in Potchefstroom simply flowed from my hand to the pages. 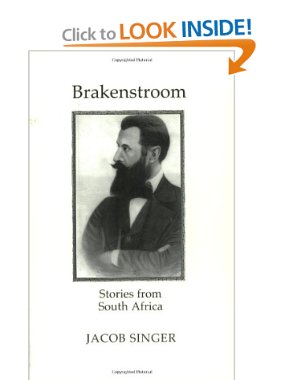 Q) Tell me about your book Brakenstroom. What is it about? How do you feel looking back at your first book?

A) BRAKENSTROOM is a book of stories I heard from friends in Potchefstroom. Every story is a true story, although in some instances, I combined two, even three stories into one. Today, when I read it, I can understand why one reader in Potchefstroom wrote to me, “I did not know that my mother had had an affair.” I answered that it wasn’t his mother. The book is still selling today, even though bookstores will not carry it.

Q) What was the catalyst for publishing? Did you always mean to be a published author?

A) I started writing, as I said earlier, because of the death of a friend. I gave my stories to a friend to read, and he told me that I should publish them. Publishers rejected the book, because they said that the stories could not be true, especially the story of Tzippie; but the story actually happened. My uncle was the Doctor, and my father told me the story pleased with the happy ending.

Q) How do you like to write? Do you like music in the background? What gets you into a writing frame of mind?

A) I write in between trading the market. I have my office, where I sit looking out the window at the mountains of Vancouver. The words just flow.

Q) Tell me about your book The Vase With the Many Coloured Marbles?

A) I met Marla (not her real name) at the municipal swimming pool, when I was fifteen years old. I would burn dark in the hot sun. Her skin colouring though was even darker. When we went to bioscope (cinema), I had white skin below my swimming costume line to show that I was a White. She could not. I had to ask my father to phone the manager and tell him that Marla was a White. We carried on a friendship for many years as we grew up. Years later, when I was serving my compulsory military training in the Navy, I saw a woman sitting in the coach reserved for non-Europeans on a train. I mentioned this to her mother, and years later, after Marla had married, she told me her story. I promised that I would not tell anyone until she had died. I think she told me the story, because she was lonely. She truly missed her daughter.

The story is how she, born Emily Kleintjies into the Coloured community in Cape Town, found that she could not live as a second class citizen in Apartheid South Africa. She decided to jump the racial barrier and become a White. She succeeded because she had straight hair, blue eyes and  light skin. She also made friends who helped her in her efforts.

She had a relationship with Eric O’Neil and slept with him before he went to war. She was scared that if she married him, her coloured staus would be revealed because she never even had a birth certificate to show. She fell pregnant, and Marla was born. Eric was killed at Tobruk.

The first book, Emma, is about Emily’s struggle to become a White and how Charlie Stuart, a Scotsman who had settled in Potchefstroom and secretly fought the Apartheid government, helped her.

The second book is about Emma’s daughter, Marla. The story is how I met her; how she joined me when I was a student in London. How she eventually met and married Bertie, and why today, she is not living in South Africa.

In telling the story of Emma and Marla, I have explained the Apartheid system as introduced by Hendrik Verwoerd, so that the reader can live with us the way we lived.

I wrote the book after I had written Brakenstroom. It took me close to five years to write and brought back many painful memories. The editing was a nightmare, with my editor, Lynn Thompson, forcing me to rewrite the story. “You will write it as though it is a movie,” she commanded. 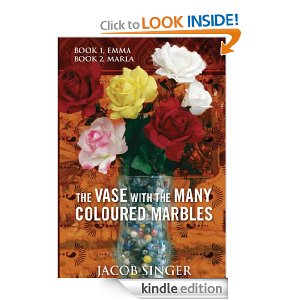 Q) How are the public taking to your work?

A) Readers who have read the book have thoroughly enjoyed it. The best compliment I received was from the sixteen year old daughter of a friend of my son’s. “Uncle Jack,” she said, “I read your book, and I loved it. It was wonderful.” I felt good, because here was a review that I had not asked for. To date, I have had only two women tell me that they could not finish the book. Both women lived in South Africa and found the memories of Apartheid too painful.

Q) How would you like to be remembered as a writer?

A) I would like to be remembered as a writer who writes a good, interesting story.

Q) Do you keep up with current events in SA? If so, how do you feel about the changes that have taken place?

A) South Africa today is going the way the rest of Africa has gone. President de Klerk, when he negotiated with Nelson Mandela, wanted a government of proportional representation. Nelson Mandela insisted on majority rule. The ANC is destroying the country. Crime and corruption is rampant. Members of parliament, including the president are robbing the country. Zuma, the president, spent R2.5 million of government money improving his house. Members of Parliament who are stealing money through excessive expenses are forgiven and carry on with their theft, while young students leaving universities cannot find jobs and turn to crime to support themselves. South Africa is a disaster where White farmers are murdered; where African invaders rob and kill for a few Rand. One can understand why Oscar Pistorius believed that his home was being invaded by robbers and shot at a closed door, not realizing that it was his girlfriend behind the door. That is the fear pervading South African whites today. With the African, rape of African women is the highest in the world.

Q) Well, I better ask a lighter question now! What are your current projects?

A) I would like to get my books out there, so that I can retire and write more. I have plenty more stories to tell, all true and all interesting.

Q) How do you feel about promotion? What are your thoughts on the process?

A) I truly do not know. I had an interview with one radio broadcaster and three book club promoters, amongst many others, and sales of my book were simply not there. But, one must not give up hope. I have concluded that authors simply do not read other authors’ books even though they quickly give a ‘like’ or a review. Finding the public that does read books is not that easy. Newspapers who promote books only promote known authors, as do radio stations. Book clubs only read and discuss authors who have become successful, by writing books that have porn, like Fifty Shades of Grey. These are books that are accepted by publishing houses and win the various competitions out there that are only available to published books.

With the revolution occurring in today’s publishing industry it has become very difficult to have a publisher even look at one’s book. This has become a deterrent to writing.

You may listen to an audio interview about The Vase With the Many Coloured Marbles and its reflection on Apartheid on The Author Show. (Scroll to Jacob’s interview in the playlist in the middle of the page.) His books are available on Amazon, through iTunes or at his website.