After reading the harrowing truths of Covert The Not Known by Vietnam veteran Jerry Nedwick, I wondered many things. I wondered how his wife felt about the conflict that had caused both her and her husband so much pain? I know that Jerry said on record that his wife deserved the Congressional Medal of Honor. This interview is with Connie, Jerry’s lovely widow. I wanted you all to read her side of the story. It has often been said that a man can only be as strong as the woman behind him– I think after reading the book you will agree. Connie deserves the limelight… Enjoy our interview!

Q) Connie, how do you feel as you look back at Vietnam? What are your thoughts on the conflict?
A) I feel the Vietnam War was a political war with no intent of our government to ever win. It was not fair to the men who served and lost lives or, even worse, came home to ridicule and so disturbed they felt they should not have been the ones to come home. Some even went back because they could not adjust to life in the U.S. anymore. The politicians who decide the fate of others should have to serve right along side of those men and women who give the ultimate price for others’ freedoms. I think the Vietnam War was one that should never have been fought. I praise the veterans who did what they thought was best for our country. God Bless them all.
Q) What did you think about Covert when you first read it? How did the truth affect you?
A) The first time I read Covert The Not Known, it was a total shock to me. I, like so many other Americans, did not understand what war really is. As Jerry told me many times, movies glorify war and the government does not want the public to know what it is really like, being so grotesque the normal person would not understand or cope. Jerry started  writing  this book after 37 years of me being married to him, and it was the first time I knew any of what the book tells. He kept it all inside, and even though I knew he had served and suffered from flashbacks, I never thought he could have gone through so much hell. It brought clear why Jerry did some of the things he did. The screams in his sleep; the times he would not sleep in the same room with me because he was so afraid of hurting me; the many locks on all the doors; not having enough guns; his lack of patience when he felt threatened by words or actions of others; the paranoia; the drinking and so much more…
Q) How did you personally cope with the struggles Jerry went through?
A) I loved Jerry very much and he loved me enough to give up drinking and smoking which I felt were bad for his health. This was all before I even knew what he had been through. We leaned on each other and God. We  worked our way though as much as we could, and I was always there for him as he was for me. I have to say his love was so strong he could “Adapt and Overcome,” which is what we always told each other in bad times. He was a true Marine and he lived by that. We made fun of his multiple personalities. Only on rare occasions did “Snake or Cobra” show up– not pleasant, but rarely did they stay around for too long. We just took care of each other.
Q) Would you agree that Covert is a powerful document that should be required reading for those who wish to serve in the forces?

A) I believe anyone thinking of going to war should read this book. Any young man or woman who wants to serve their country should read this book. I also believe the average man or woman need to read this book before they ridicule our armed forces. I believe you cannot judge someone else until you have walked in their boots.
Q) What was Jerry like as a husband?
A) Jerry was a wonderful husband and father, we rarely argued. But when we did, it was a doozy. If I had know then what I know now, I might not have argued back. He took care of me and our children, always provided for us. He was fun and kept me laughing. He was romantic. When I would have to go out of town for business, I always returned to roses throughout the house, and I truly felt missed and loved by him. Jerry was a very giving person in so many ways. I can remember countless times when we would be traveling and he would stop the car, pull over and take what money he might have to give to a pan-handler. When I asked what he was doing, he would tell me he was helping his brother. That meant another veteran, for he believed if it were not for me he could have been in that man’s shoes.
Q) How do you feel Vietnam should be remembered?
A) I feel the Vietnam War should be remembered for those who served. Those young men who gave their lives for a cause they believed in at the time and the honor they brought to their families and this country.
Q) How do you feel about all the wonderful reviews Covert has achieved so far and the amazing success the book has garnered?
A) I am very pleased about the reviews Jerry has received for his book. Jerry had a talent for writing in such a way as to make you feel you were right there with him in that jungle. He was a master story teller and it was such a loss for him to discover his talent so late. I am very proud of Jerry and his work. I hope other readers enjoy the book as much as those who have given their reviews.
I think it is really important for you all to know that war doesn’t just change the lives of warriors. It changes the lives of everyone it touches. I think many people treat conflict lightly. Vietnam was as bad as any conflict could possibly be, but this interview just goes to show that with the love of a great woman you can be healed.
Covert The Not Known is available on Amazon 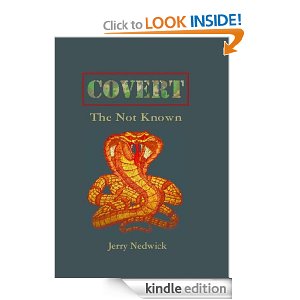