A few weeks ago, I reviewed a book by writer Mike Trahan. Mike is a Texan who never dreamed that he would be successful in the world of writing. He wrote more as a pastime. He liked to put pen to paper and scribble his thoughts down or write for magazines. Then he wrote The Gift…

I was thoroughly intrigued with The Gift from the beginning to the end. Mike Trahan has a gift of writing as well as that of a gifted pilot, his life-long goal.

Five star review followed five star review and the sales started to roll out of Mike’s door. First the book sold 100 copies, then he ordered some more and some more and more… Now, the demand for the book still hasn’t ceased. Trahan has done signing sessions and he’s been approached by a journalist.. Everything is shaking for the man who only wanted to fly.

The book captures your imagination from the start. As a news reporter for 35 years, I have never read events with statistics that were so interesting. I’m a fan of fiction writers James Patterson and Stuart Woods. I find Mike’s non-fiction writing as intriguing as those depicted in the fiction murder plots.

So, what is it about The GIft that has made it so popular? Is it the strong storytelling? Is it the tales of a forgotten age? Is it the truth and honesty of one man and his realistic expectations from life? Is it just a quaint tale of a guy who got to fly planes?

The Gift by Mike Trahan made me think about what life was like for us kids growing up during the 50s-nothing really expected of us except go play & play we did-chasing butterflies-making a fort with my brothers-running around the neighborhood barefoot-climbing trees & the list goes on. Then came time to go to High School & on to a career-in his book Mike really shows how much flying meant to him, a couple of times it even kept him out of trouble-Mike really lets the reader know what a fine man he is as he makes decisions along the way- can’t wait for the sequel!

I tried to catch a Mike Trahan for a quick Q and A this evening. Live, hot, straight to the page interview. The first of its kind before those journalists wear him out!

“Hey, Mike, let me ask you a few questions would ya?”

“Sure thing give me fifteen minutes.”

I waited in anticipation, it was just a matter of time before I could ask all the questions.

“Mike, I just wanted to ask a few questions. How has the reaction to your book been so far?”

“It has been nothing but positive, Nick. Everyone I have spoken with is raving about it. They say they can’t put it down. I sold out my first inventory of 150 books in TEN days. I have another order of 96 books coming in on April 1 and 30 of them are already spoken for.”

“You never expected that kind of response did you? I mean, this book was never meant to be a big hit for you?”

“This is my first book, Nick. I wrote it for posterity, for the family to have a history of their Dad. But people started asking for copies of it, and it has turned into something else. I never dreamed it would catch on like it has.”

“Now, I have heard that you just finished your first signing a few days ago. How did that go?”

“Absolutely a success. We took ninety books there and sold out in five hours! Amazon sales are ticking up, too!”
“Would you say it has been a great success in your eyes?”

“Nick, I sold my entire inventory of 150 books in TEN days! That was a complete surprise!”

Did you miss The Gift? Not a problem! Get your copy now! 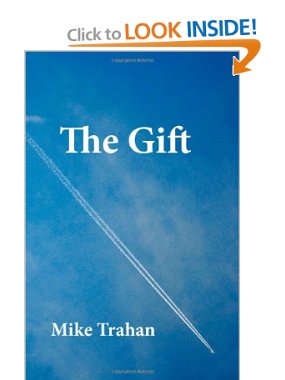