Irving Confidentially – An Inside Look at Courier

Terry Irving took the time to speak to me yet again. (Click for the first and second installments.) This was to be our third interview. Terry, calm as usual, took this in his stride. Years of being under pressure in the busy television studios of the USA has taught him patience. In a mellow mood, the interview opened as follows… 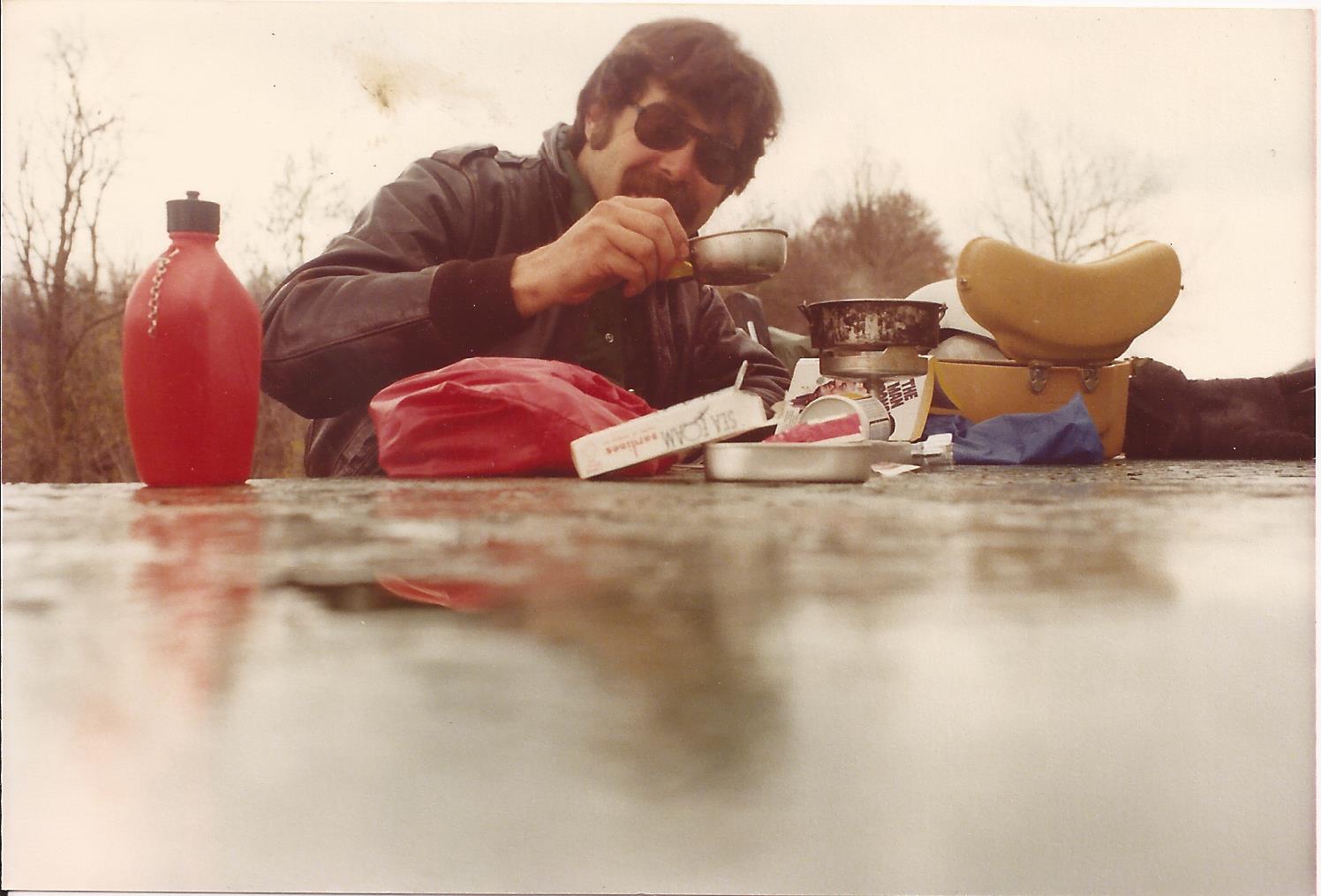 Q) So, Terry, tell me how does it feel to be the author of Courier and how has the experience of writing a book changed your life?

A) Writing Courier was a challenge I set myself and I was proud when it was done. That feeling of success lasted about half-way through the endless process of finding an agent and then hearing about publisher after publisher turning down the book.

Q) Tell me about your struggle to find a publisher. How many publishers turned down your book and what reasons did they give?

Well, ALL the publishers turned me down. ONE agent did not. I wrote to dozens of agents. My carefully plotted and penned “Query Letters” got nothing but refusals. They ranged from the polite to, “Who the heck are you and how dare you disturb me while I’m agenting to the rich and famous!!”

Finally, Word|link picked up the book and actually liked it. Dean Krystek (my agent) still does. He got it into all the major publishers and got it handed right back.

Q) Why do you think Courier has had such a hard time finding a home?

A) The publishing industry is scared to death. They have no idea how to handle the changes in the book business so they are only taking authors that arrive with their own pre-buiilt audiences. “Urban paranormal romance,” “cozy mystery,”  “historical erotica,” whatever.

It’s sad that you need to walk in with not just a manuscript but an entire marketing plan.

Q) How are you planning to fight the competition to make Courier a hit?

A) I’m in the process of developing a niche base and learning how to market.

Q) Has there been a single, outstanding moment on your journey to get Courier finished?

A) I will say that there has been one incredible experience. When I announced on Facebook that I had the actual book in my hands, I got hundreds of congratulations. It felt like everyone I’d ever met was slapping me on the back. That kind of thing can make even a macho guy like me get a bit misty eyed.

Q) For a man with a career as strong as yours has been, where does the release of Courier come on the scale of great things that happened to you during your life?

A) It’s cool, but winning my first Emmy was cooler and the birth of my daughter and my grandson blew both of those experiences away.

Q) Can you give me a rundown of what Courier is about in your words?

A) Courier is about a period and a person. I first came to Washington, DC in the Watergate Era and I’ve realized that most people no longer remember it or only have the distorted memories they got from watching the movie “All the President’s Men.”

Part of the purpose of the book was to try and recreate a really interesting city that has completely disappeared. In addition, I wanted to rebuild the TV news of the time – with 16mm film, and crazed correspondents, everyone smoking everywhere and a lot of raw politics washing around. That was VERY different from what’s out there now.

Finally, there are Rick Putnam and Eve Buffalo Calf. They’re the most surprising part of the writing process to me. It’s like they’re actors who show up on set and perform. It sounds so trite I almost don’t want to admit it, but I really have no idea what they’re going to do next. And I LIKE them.

Q) Rick, the protagonist, is vaguely based on yourself, am I right?

A) Rick is the cool dude I’d like to be and Eve is a tough and smart woman who backs up to no one.I tried to base it on myself and it totally SUCKED. I finally had to base Rick’s character on a combination of Nicholas Cage and a couple of correspondents I knew back then. There is really very little of me in there. In fact, I should thank them — Roger Peterson was a reporter in Vietnam and was severely wounded; he was told he wouldn’t use his arm again, yet worked tirelessly until he proved the doctors wrong. Jack Smith was a private in the battle of Ia Drang and wrote what I think is the most vivid account of any battle as a 19-year old in a Japanese hospital.

Both guys were incredible journalists and wonderful people who, sadly, have passed on far too soon.

Q) How about the characters of Hector? Mrs Jin?

A) Hector wasn’t based on anyone nor was the Gray Man or Mrs. Jin. Most of Eve was based on a single photo I found somewhere.  The three computer freak roommates, on the other hand, are based on three guys I lived with in 1973 when I first moved down to DC. They weren’t anywhere as cool in reality as they were when I got done with them in the book ,but that’s the fun of it.

Q) How do you hope your book will be received?

A) I was never trying to create Great Literature. I wanted to write a book that you’d pick up in an airport and buy because it looked like it would be amusing enough to pass the time on your flight to Los Angeles. There, I’ve apparently succeeded. All of the reviews so far have pointed out how they devour all 77,000 words in one sitting.

Q) Can you even compare the world of today with those heady days of the early ‘70s?

A) Sure. My knees hurt more now than they did back then. Somewhat seriously, you can’t really see where you are when you’re living in it. Until I started researching Courier, I didn’t really grasp how much things had changed. I don’t know if it’s better or worse but it’s certainly changed.

I guess, things were a lot more rough-edged and crazy but that probably had to do with the fact that the Baby Boomers were 22 and we were being crazy all over the place.

Q) Any defining memories of the era?

A) I used to hitchhike all the time – cross-country, down to Florida, up to Alaska. I never thought anything of it. I slept under vans and in abandoned buildings; even on the beach a couple of times – extremely pleasant.

I went to Florida for a week with $39 and returned with $24.I would have had more, but I loaned most of it to some heroin addicts and couldn’t get it back.  Never loan money to a junkie.

Q) I’m surprised you didn’t find yourself at Woodstock.

A) A couple of my friends were there – and won’t let you forget it. I was considering it, but I was still only 16 and my parents were able to send me off to my grandparents in the Smoky Mountains. The closest I got after that was selling ice cream outside a Stones Concert in Philadelphia.

Q) Did you sneak off to see the concert?

A) Of course not, I had ice cream to sell. I was cut off by my parents at 19 and had to pay for the rest of college by myself –ice cream played a large part in my plans.

Q) From ice cream to a News Producer with endless awards, contacts and influence… How did it happen?

A) The usual way– dumb luck, time and being too stupid to know when something was impossible. I recommend the combination to all young people. Also, never doing anything, EVER, that isn’t fun. Even running around Beirut and being shot at was fun. Well, for a while anyway.

I have to admit, even getting picked up by the South African police had its funny moments – as did almost getting killed by the South African students we had been filming. Sitting at dinner in the Hotel Commodore as three guys came in and shot up the place was a bit less fun, but it turned out that it was only a matter of business and after they’d shot the guy in the thigh who owed them money, they left like proper gentlemen.

However, don’t let these stories fool you into believing that I ever had a clue what I was doing. I can bring you dozens of colleagues who will testify that I was completely clueless at all times. Still am, most of the time.  I guess things haven’t changed all that much.

With our interview all but over I thought about what was said. Here stands a man who has done so much with his life– yet, in some ways feels that he hasn’t done enough. Angry? Perhaps, but I know one thing that makes him a top guy in my book: he will give anyone a chance and if you screw up then that’s your problem– but he will give you a chance and that is class as far as I am concerned.