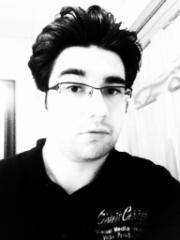 Young writers come and go like the leaves on perennial trees. It is a fact that many people want to write books. In a survey conducted it was said 93% of the population of the USA wish to write a novel or biography. It is very easy to become lost in the deep waters of the literary world. I am telling you! Forget those worries as just one look at Joseph J. Langan tells you that he is going to be a hit on bestseller lists for a long time. With one hit anthology under his wing already, he now has a solo project on the way that will knock you off your feet. The book is provisionally called The Encoded Promise and has a plot that is already driving his fans nuts with anticipation!

Joseph strikes me as a young man who will change the world. The real man comes from Ohio and loves it there. Although it rains a lot– he wouldn’t want to be anywhere else in the whole world. Looking like nothing other than the young American dream he smiled and settled down as we started the interview.

Q) Hi Joseph! Let me ask you, are you nervous?

A) Hi Nick! Not to an unmanageable degree. Just excitement anxiety. This is my the first interview I have given recently about my writing!

Q) Well, I’ll take it easy on you Joseph. I know you’re a busy guy so let’s start off with the obvious. What is your new book called and could you tell us a little about it.

A) The working title is The Encoded Promise. It’s set far in the future and is about a girl living on Europa–one of the moons of Jupiter. After Earth became uninhabitable, the Government moved the surviving population to this moon and pressed the restart button on society, banning most art forms, music, religion and other cultural expressions. The girl lives in a utopia, but slowly learns the world is not as it seems. With the Government running everything and lawless rebels running about beyond the confines of her Installation, she quickly learns her world is really a dystopia. The novel really picks up speed when her home is attacked and she has to leave the world she knew, venturing into the unregulated chaos in search of her kidnapped brother.

Q) Sounds like a great idea for a bestselling book Joseph. Do you think the world will ever evolve into such a ‘big brother’ society?

A) In some ways I think it has already begun. The silk has started to spin and our cocoon is in the works. Will we go through the whole metamorphosis into a not-so Brave New World… I certainly hope not.

Q) Only time will tell I suppose. So you wouldn’t want your book as a reality? Is it more of a warning?

A) That can be said about it. I’d rather my readers make that conclusion for themselves. In some ways society would benefit, in terms of peace; in other ways, we would be stripped of our humanity. There are pros and cons, but that’s for the individual reader to decide.

Q) How have readers so far taken to your work?

A) I’m an active member of a writers’ critique group. Being the youngest member, they have taught me a lot and I certainly think I have grown and evolved. Generally, the response is very positive, and if not, I always value constructive criticism. I don’t take it personally, it helps me to flourish as an author.

Q) How do you handle criticism without merit?

If it has no merit, I take it for what it’s worth.

Q) So how did you get into writing? What drives you as a writer?

A) I have been writing religiously since grade school. My second grade teacher inspired me to put pen onto paper and since I have never wavered in my ambition to succeed as a writer. When I’m writing poetry it’s the emotion that drives me. I feel the rhymes coagulating with the feelings, mixing into a dangerous cacophony of passion. Be it fiction–it’s the story that drives me– or the revolutionary idea such as “What if Twitter posted people’s current state of consciousness instead of a written status, and if we clicked on them we saw through their eyes, felt what they felt?”–which is the main idea that propels a short story I wrote called Big Brother. Whether it be emotions, the plot, or even the “big idea,” I am never at a shortage of inspiration.

Q) Many of your readers will already know that you’ve written a lot of material, and are an experienced writer. Do you have a personal favourite?

I’m very proud of my upcoming novel, The Encoded Promise. When the story was just a twinkle in my eye, it got me thinking. I transitioned from more of a high fantasy/horror storyteller into a manufacturer of seedy Science Fiction prose. I think The Encoded Promise captures the feel of a classless society and the struggles they face, as well as paints a strong contrast with the rebels who in many ways mirror the modern day “punk” sub-culture— just with anti-gravity weapons and the ability to digitally send thoughts from one brain to another. *Laughs*

Q) It sounds fascinating to me and I am sure it’s a going to be a great success. For people out there what are your latest hits?

A) I have several short stories and poems published in the anthology, Grim Vengeance. They are more horror-themed though, written before I solidified as a SF writer.

Q) Where can people purchase your work? I’m sure a lot of people will be curious.

A) Grim Vengeance is available on Amazon in both print and ebook formats. Be on the lookout for my stories The Moles and Human Farm as well as my anti-abuse poem, Victims and Vultures.

Q) People keep saying how hard it is to sell books. How are sales holding up for you?

A) Grim has done very well! At peaks, it’s been in the Top 5 in new Drama anthologies and in the top 50 for new Fantasy anthologies. I’ve received a few messages from fans who enjoyed my work. That made me feel like a million bucks!

Q) That’s great to hear, Joseph! I’m glad you are garnering such success! Do you have a writer’s page people can follow?

A) I sure do! I’m on Facebook and Twitter and am updating my blog, so hopefully that will be ready soon. I have plans to create a website, as well.

Q) How would a reader get in touch with you? Do you have a contact address?

A) The best way to contact me privately would be my email, JosephJLangan@aol.com I’m always delighted to hear from fans!

Q) You strike me as a genuinely nice guy, Joseph. How about telling us a bit about the man behind the typewriter?

A) *Laughs* The man is inseparable from the stranger behind the typewriter….But in all honesty, I view myself as a nice guy. Sometimes, I play the bass and record and mix music. I don’t believe chivalry is dead, and in some ways, I can be quite the romantic. I’m kind of a private person also—always more of an observer than a doer, but aren’t most writers? I care deeply about my friends and spend a great deal of time pondering the future. If there’s any way I can apply my abilities to make a difference, I do so.

A) That’s for you to find out once it’s accomplished. *smiles*

Q) I’m sure we will all be watching to see what you do next. So, tell us all what is next for you?

A) I’ve written over half a dozen short stories, so I’m shopping them around. In the meantime I’m editing The Encoded Promise and plotting the potential sequel, on top of working at a library. What’s next for me? Polishing the manuscript and finding the perfect publisher, of course.

Q) Thank you for your time, Joseph. Is there anything you’d like to say to your readers and fans before we finish?

Feel free to check out my Facebook page, my Twitter or shoot me an email. When it comes to fans, I’m an open book. Be on the lookout for The Encoded Promise, and to aspiring writers: stick with it. You are the only thing standing in your way from success. Believe in yourself and you can achieve. Thank you for having me, Nick! It was a pleasure.

What more can I say, Joseph? It was a pleasure and I hope we can do it again sometime.

With that the interview was over and Joseph returned to his work. There are so many talented writers in this world and for some it is a choice. For guys like Joseph J. Langan it is a calling and they cannot afford to ignore it! I believe with this new book The Encoded Promise there will be no stopping this boy!

Check him out on the links below: 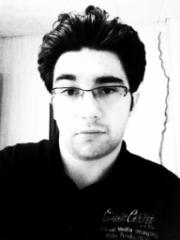 A writer to watch!