To Dream of Hope

Al Martino, The Voice of My Choice

Recently whilst writing, my eyes were drawn towards my record collection. Now, I have a few hundred records, mainly ballad singers and opera, rock and roll, country and a lot of jazz. Not a huge collection, but enough to please me. One of my favourites is an album entitled ‘The Exciting Voice of Al Martino’.

This album has been around me since I was a kid. Battered and bruised, it still plays and I still get immense joy out of it. I would like to tell you what I think about the singer, the albums, and why I enjoy his work.

For me, a singer has to move me. I don’t have money for records that don’t appeal directly to me. I choose what I buy carefully, but I have every single record by Al Martino. Every single disc I could find– single, album, whatever the medium, I had to have it.

Let me tell you about this singer. He sings with soul, class and from the heart. Al Martino, for me, is class symbolised; his voice grooves through songs, giving every ounce of emotion to even the most overly recorded songs. I personally believe that some singers are music, everything they do is musically driven, perfect in every way. Sinatra is one of these perfect musical talents, Elvis Presley is another, Dick Haymes, Ella Fitzgerald, and none more so that Al Martino.

Take for instance his swing album, ‘Swing Along With Al Martino’, a beautifully recorded album with what could be the definitive readings of ‘Summertime’ and ‘‘Making Whoopee’. Now, these songs are always desired for singers, even today. It’s an achievement to sing them, but Mr Martino gets them to their highest. I have never been so moved by these songs as I was when I heard his cuts.

Move into country and we find him well at home. ‘I Love You Because’ is a great country song. It was sung nicely by several big country stars. Al Martino comes along and makes it his own– the phrasing, sincere reading and perfect feel make it my favourite version. The parent album is so good, I have worn out several copies. ‘Take These Chains From My Heart’ has never sounded better as far as I am concerned. Beautiful arrangements by Belford Hendricks, the wonderfully talented guy who gave Nat King Cole that country sound, allowed him to hit the charts in his later years.

Then take Mr Martino and his comeback album, ‘The Exciting Voice of Al Martino’. I cannot rave enough about this album– Mr Martino had been off the scene for a few years. He returned to the States, knew he could return to the top with the right material. He recorded this album, it hit, and it hit the big time. It was this album that sparked his second and hugely successful return to the top of the charts. The record itself and the songs are tasteful, beautifully arranged and showcase his huge voice to its best. ‘Make Me Believe’ is one of those great pop songs, high in range and mighty. The song itself is a pretty ditty. The way Al Martino sings it makes it a classic. He hits those notes like an angel riding a cloud of power. However, my favourite cut on the album is that operatic favourite ‘Nessum Dorma’. I really loved Mario Lanza singing this song, but Mr Martino takes it home for me. Slowly, he climbs the song, feeling every lyric and then finally he let’s loose. No opera singer ever did the song better, as far as I am concerned.

Albums continued to come, all powerful, all beautiful. That voice, every single time, always the same and always exciting. I would suggest any music lover try them out, the seventies brought some great pop albums from this tour de force singer– albums like ‘To The Door of the Sun’ and ‘Love Theme from the Godfather’. I believe every single one is a gem, a real, moving gem.

I was eighteen when I heard that he had died. At the time, I was in college. As I was sitting eating breakfast, upon hearing the news, I was in shock. I had never met him or even seen him in concert. The one opportunity I had to see him life was dashed by other problems. All I remember from that morning was rushing to find one of his albums because the music always lives on.

To me, Al Martino is one of the greats. 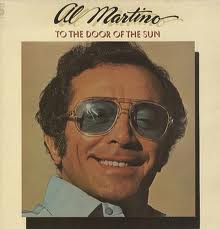